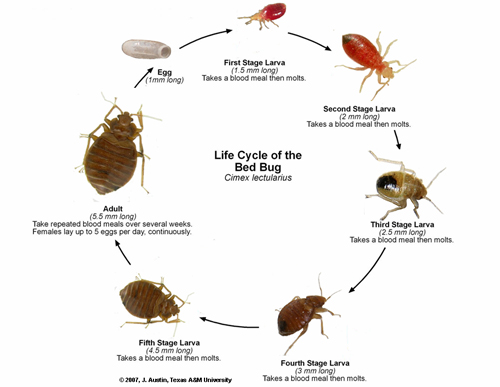 Bedbug breeding is not a pretty thing. Female bedbugs do not have exterior genital opening so in order to mate the male bedbug pierces the abdominal body cavity of the female with his hypodermic-like reproductive organ and ejaculates into the body cavity. The female bedbugs lay between five and 12 eggs each day. During their lifetime one bedbug can lay up to 500 eggs. The female bedbug deposits the eggs into small crevices and cracks for them to hatch later on. The eggs are approximately one millimeter in length. It takes up to two weeks for the eggs to hatch. Once they hatch they immediately begin to feed. Bedbugs are the size of a poppy seed when they are first hatched.

Juvenile bedbugs are called nymphs. Nymphs are yellow white colored but when they consume blood they turn bright red. They are similar in shape to mature bedbugs. Nymphs pass through five molts before they reach maturity, each time leaving behind a clear exoskeleton. Every time the bedbug sheds its exoskeleton they get a little darker. In order for the nymph to pass through each molt they must consume one meal. When at room temperature it takes less than five weeks for the nymph to complete the five molting stages to reach maturity.

When bedbugs reach maturity they become fertile and can breed. Bedbugs have six legs, and a three part segmented body consisting of the head, thorax, and abdomen. Mature bedbugs reach 4-5 millimeters in length and 1.5 to 3 millimeters in length. Their oval shaped bodies are comparable to an apple seed. When bedbugs reach maturity their color ranges from dark brown to burnt orange. After they have consumed a meal of blood their bodies turn redder. Bedbugs have a life span that commonly ranges from four to six months, although in ideal conditions some bedbugs can live for years.