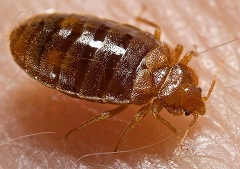 Bedbugs are small insects that, along with the rest of their insect family, live by feeding on blood from warm-blooded animals. They have been infesting humans for thousands of years but were, for the most part, wiped out. Starting in the mid 1990’s they began showing up in increasing numbers again and may be due to less careful measures of prevention. They were for the most part eradicated in the 1940’s and in the following 50 years people thought less and less about them. They are active at night for the most part and are able to feed without being noticed by their host.

Many people deal with bedbugs in their home or apartment on a constant basis. These tiny insects are actually attracted to the upholstery in a home and will multiply and reproduce very quickly. In simple terms, a small infestation can turn into a large problem within just a matter of days or weeks. It is thought that bedbugs are attracted to dirty environments, however, it’s not uncommon for an apartment to get bedbugs because their neighboring tenant has them. Bedbugs are often an annoying and widespread problem in apartment complexes.

They are flat with an oval body in a light to reddish brown. They do not have wings and almost appear to have stripes across their backs and this is caused by rowes of tiny hairs. The mouthparts consist of two tubes, on to inject saliva that aids in keeping the blood from clotting, and the other used to suck up blood. They can feed in five minutes and will then return to their hiding place. They do not have to eat every day and have been known to survive a year without food. It can have nesting and hiding places almost anywhere and are sometimes called the wall louse.

The bites cause different problems for different people and can show up as rashes, blisters, or just a red blotchy look. In some cases, the person fed on shows no signs at all and in others their could be allergic reactions. The only way to treat this is to get rid of the Bedbugs and this is not easy. They can survive without food for a year in some cases and also enter a hibernation phase when the tempature drops too far. Dogs are now used in some cases to detect bedbugs and have a great success rate. In the end, it will take determination to put these guys out of our minds for a second time

Bedbugs are not Invisible

The common myth about bedbugs is the fact that they are invisible to the naked eye and that you need a microscope to see them. The truth of the matter is that an adult bedbug can actually be seen crawling about mattresses and furniture and this can especially be true if you have a large infestation of bedbugs. Large infestations of bedbugs can be seen very easily on the floors, upholstery, and even walls of your house and apartment. The bugs themselves are flattened and brown or red in color. They do not have wings but instead have a series of black bands on their back. Nymphs, which is the term for newly hatched bedbugs, are completely translucent and will more than likely not be seen by the naked eye because they are very small.

Where to See Bedbugs 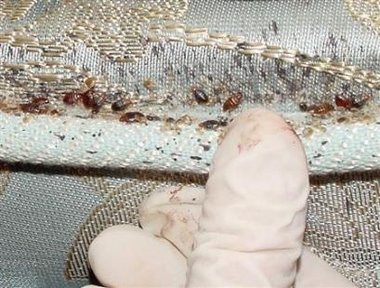 The bedbugs themselves can often be found in the crevices of mattresses and walls because their flattened bodies allow them to squeeze into tight spots. They will often be found away from sunlight. These small but harmful bugs can be extremely hazardous to have within the home. Bedbug bites will often look like small pimples and if you have a large infestation, you may find that you can not sleep at night because the bugs are biting at all areas of your body and face. Because bedbugs multiply quickly, it’s a good idea to have a professional exterminating service come into the home in order to have the problem completely eradicated. Depending on the size of the infestation, the home or apartment may need several exterminations in order to get rid of the bedbugs completely.