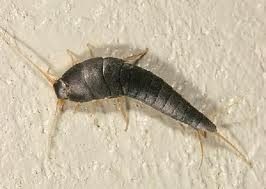 Silverfish don’t reproduce particularly quickly, but they live a long time, between two and eight years, so over time an infestation can grow to be significant. In this article we’re going to examine the reproductive cycle of the silverfish.

Silverfish have an elaborate mating ritual that involves three steps. In the first step the male and female silverfish stand head to head, facing each other, their wiggling antennae touching. During this time the two silverfish repeatedly retreat from each other and then return to their former position. Once this first stage is the over the male runs away and the female chases after. The third stage occurs when the female catches the male. Once the female has caught the male, the two silverfish stand head to tail, side by side, while the male vibrates his tail against the female.

This mating ritual can last for up to 30 minutes.

Once the mating ritual is complete the male lays his spermatophore next to the female. The female then takes the spermatophore into her ovipositior and fertilizes the eggs. Once the eggs have been fertilized the female deposits the eggs into the protection of a small crevice. The female can lay up to 50 eggs at one time. The eggs are whitish, oval shaped, and about 0.8 millimeters in length. It takes the eggs between two weeks and two months for them to hatch.

When insects are first hatched, they are referred to as nymphs. Nymphs are the immature form of the adult species. Silverfish nymphs look much like adult silverfish except they are whitish in color. As the silverfish under molts, their exoskeleton begins to change color. They gradually shift from whitish to a darker grey with a metallic shine. It takes silverfish nymphs anywhere from three months to three years to become an adult silverfish. During their lifetime silverfish can undergo 17 to 66 molts. Silverfish are unusual in that they continue to molt even after they have first mated.

Silverfish are small carrot or tear shaped insects. They are gray-brown to silver-blue colored, and are completely wingless. The reason this insects are called silverfish is because of their coloring as well as the fish like shape of their bodies and their fishlike movement. Silverfish are extremely quick runners for short distances and their swift, fluid like movement is reminiscent of swimming fish. Adult silverfish range in size from a half an inch to about one inch in length. They have one set of compound eyes and one set of long wiggling antennae.