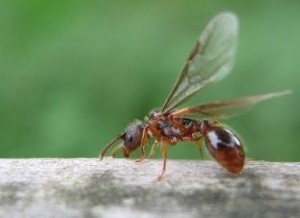 Depending on the species of ants, most of the queen ants are what are known as Asexual. This means, they do not need a male to produce offspring. Typically what happens is when the female ant in a colony is ready to reproduce, they will fly away from the colony to start a new colony. Some may flies many miles, while others maybe only a few feet from where they actually were born themselves. When the queen ant finds the perfect place for them, they will land, loose their wings and then begin their new colony.

An Asexual queen ant can produce thousands of ants for her new colony being the parent for the entire colony. There usually is no other ant involved in this continuing cycle. She of course will produce a series of queen ants that will follow in her footsteps to create the next colonies and so on. Each queen ant can produce hundreds upon thousands of other queens in her life time. Of course this varies on species of the ant.

With other species of ants, it is truly amazing the ritual that is put into motion to create a new colony. As with many species the female or rather queen ant will head into flight, but so do the sexually matured males. The female and male will mate in flight, when the mating cycle has ended in many species of ants, the male will die. The female, however will fly to a location to create a new colony, when she has landed in the spot that she has chosen, she will first loose her wings. This ritual is called the nuptial flight.

Another misconception that many people may have is about the queen ant. She does not govern over the colony in any way. Her general job is simply in the reproduction and building of a colony. A colony of ants works together they are not like many species of creatures where there is a hierarchy. In an ant colony they work more like an individual family in some aspects, each working and helping one another. A good example of this is the worker ants and how they help make sure the queen ant is fed and taken care of so that she can continue to reproduce.