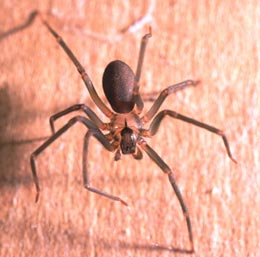 The brown recluse spider (scientific name: loxosceles reclusa, also commonly called the brown fiddleback spider) can look formidable, especially one that has full grown to having a body ¾ inch long. The it’s long legs make it look imposing. But they get the name ‘recluse’ due to their natural tendency to avoid contact, especially with people.  The brown recluse is a non-aggressive spider, that only bites out of defense.

Unlike most spiders which have eight eyes, the brown recluse spider has only six, two in front, two on the sides and two in the back. Since it lives in dark secluded places and prowls around at night, it doesn’t need to see very much. Its other senses suffice.

As you might expect, the brown recluse is brown. Some say it resembles a violin, Maybe you will join me in thinking that likeness takes a little imagination. You might live a long time near some brown recluse spiders without seeing one, but because of the size of a fully mature brown recluse, when you see one you will be impressed. 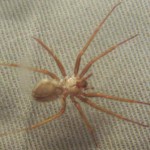 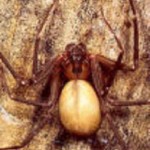 The brown recluse likes some human habitations and they can be found in wood piles, sheds, cellars, garages, dark closets, under beds, and other places where it is dry and not often disturbed. They like cardboard, some humans say, because it resembles tree bark. They might be found in shoes that haven’t been worn recently, behind baseboards, behind pictures, near to furnaces.

As their name suggests, the brown recluse spiders are reclusive and they prefer to stay out of the way and out of sight. The brown recluse builds a web, mostly as a hiding place, not as an insect trap. This web will be in some dark corner and it will not be very fancy.

Almost all the American brown recluse spiders are to be found in the southern part of the middle of the United States. Not many are ever found along the Atlantic or Pacific Coasts. Not many are ever seen in the Rocky Mountains or the Northern Appalachians.

At night this spider goes roaming around for food. Unlike most other spiders, the brown recluse spider is not picky about eating insects that have died somewhere along their way. They don’t have to be the killer of their food.

In addition to looking for food, the male brown recluse spider will go looking for females to mate with at night. The female will lay 40 to 50 eggs inside a coat of gray silk about 2/3 inch long. Each female brown recluse spider may produce several coats with eggs in a month. As you can see, given enough other dead bugs to eat and plenty of dark nooks and crannies, a rambling house with few human inhabitants can gain a substantial spider population.