The Formosan subterranean termite, (Coptotermes formosanus Shiraki), is an invasive species of termite. Its native habitat ranged from Southern China to Japan to Taiwan. The Formosan termites get their name from Taiwan’s former Portuguese name, Formosa, meaning “beautiful.” 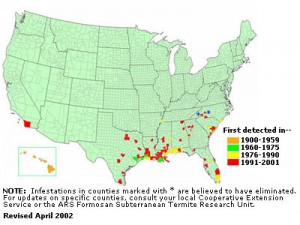 Since that first appearance, they have been found in Alabama, Georgia, Florida, Louisiana, Mississippi, North Carolina, Tennessee, and Texas. An isolated colony of the Formosan termites has even been found in San Diego, California in 1992.

Formosan termites are rarely found north of 35° north latitude because their eggs will not hatch if the temperature is below 20°C (68°F). It is believed that this insect population was introduced to many port cities at the end of WWII by ships returning from the Pacific Ocean Theatre.

Formosan termites have earned the nickname the “super-termite” because of their destructive eating habits.

There are four main reasons these insects are so destructive:

The Formosan subterranean termites are among the most destructive termites in the world today. These termites don’t just eat wood, they have been known to chew through foam insulation boards, lead and copper sheeting, some plastics, and even asphalt. Once these vicious termites a colony it has not been possible to eradicate them.

Formosan termites can build colonies both below and above ground, although they generally live below ground. Underneath the ground the termites build an extensive series of tunnels that they use for foraging. Formosan termites build large nests that are made of carton. Carton is fecal matter that the termites use to build the wall structure of the nest. The colony can live of the moisture from the carton for months. The nests can be both in soil and above ground hidden away in the walls of buildings. These nests can be as large as several cubic feet.

Formosan termites have a caste system composed of a king, queen, workers, soldiers, and alates (reproductive winged termites). The king and queen are the primary reproductives in a colony. The queen has a life span of about 15 years, and can lay up to 1,000 eggs per day.

Worker termites provide the food for the colony, tend the eggs, build and maintain the nest, and generally care for the soldiers, larvae, and alates.

Soldier termites defend the colony. Soldier termites can produce a protective poison called naphthalene, which repels ants, poisonous fungi, and nematode worms. Soldier termites are very aggressive and will attack fingers and tools if they are provoked, fortunately their poison is harmless to humans.

They have orange-brown oval shaped heads, and black sickle shaped mandibles. Their bodies are yellow-white and are about 1/5 to 1/4 inches long. Worker and solider termites only live for 3-5 years. Alates breed the colony; they can lay approximately 15 to 30 eggs. Alates are also called swarmmers, and have a tendency to congregate around light from windows, light fixtures, and window sills. Alates are yellowish-brown with golden brown heads, black eyes and two pairs of wings. They are about 1/2 to 3/5 inch long from head to wing tip. Alates that successfully breed will go out to form their own colony and become the king and queen of that colony. Few alates survive the quest.

Signs of infestation of Formosan termites are swarmmers at night that are attracted to light, shelter tubes made of soil that are filled with termites when broken open, damaged wood that sounds dull when tapped with a hard object, or nests made of carton. Several ways to fight infestation are to create barriers, fumigate the infected area, and set baits. Prevention is the best tool against termites. A liquid insecticide should be administered to the soil beneath and around the foundation before building begins. Siding and insulation should not touch the ground during construction. Pressured-treated lumber in critical building areas will lessen the risk of termite infestation.